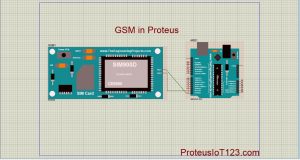 After having the brief introduction on GSM and GSM module let us now looks at the simulation of the GSM in Proteus. As noted earlier in the post that the GSM module can be used in a variety of embedded systems such as GSM based home automation systems. The microcontroller commonly used for Prototyping along with the GSM module is Arduino. Arduino microcontroller is very popular among students and hobbyists. But before implementing the hardware and code in the real world it is always beneficial that you simulate the whole setup. The simulation prior to developing hardware saves both money and time. 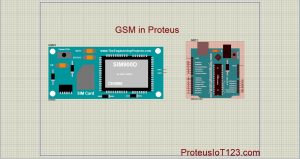 Place all the components in the workspace of the Proteus.

Attach the simulation file to the GSM module as shown in the following figure: 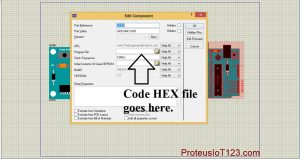 Connect the circuit as shown in the following figure:

The circuit is quite is simple.

Now attach the HEX file of the code developed in the Arduino IDE to the simulation model of the Arduino used in the Proteus.

After uploading the HEX file ht the simulation button and the simulation will start.
That is all for now in the next post I will come up with more interesting topics and applications of Proteus. Till then stay connected, keep reading and enjoy learning.