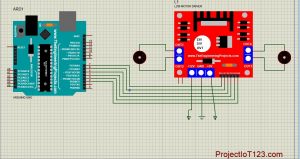 L298 is basically the Integrated Circuit chip that is used to drive the DC motors. The chip is designed in such a way so as to control two DC motors simultaneously and in addition control the direction of rotation of each motor, I will go into detail about this later in this post. The L298 chip looks like the one in the following image: 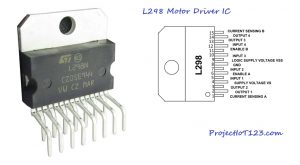 The L298 IC is a high current, high voltage full bridge driver designed to accept the standard TTL (Transistor-Transistor Logic) logic. The chip is optimized to drive the inductive loads such as relays, solenoids and DC motors. The Block diagram of the L298 motor driver IC is as shown in the following image: 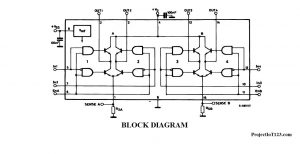 As can be see that there are four input pins and four output pins along them two Enable pins are also available in chip. The working of each of the pin will be discussed in the following section.

The pinout of the chip is as shown in the following table: 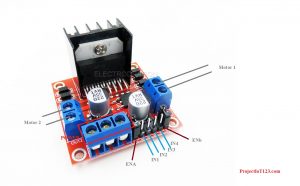 The circuit in the above figure is called the H-Bridge circuit and is used to control the direction of rotation of the motor. Each input of the bridge lets the motor to rotate in either clockwise or counter-clockwise rotation.
The enable pin of the motor driver IC that is the ENA and ENB enables the bridge inside the IC.

Why need the L298 Motor Driver?

How to use L298n Motor Driver:

As we saw in the previous discussion that the L298 is the motor driver IC but usually it is available in the modular form which is ready to plug and play. The module of L298 motor driver looks like the one in the following image:

The control pins, output pins and the power pins are available at the connectors of the module. Let us consider the working if each pin in detail.

This pin along with the INPUT2 pin is used to control the direction of the motor 2.

This pin along with the INPUT1 pin is used to control the direction of the motor 2.

This pin along with the INPUT4 pin is used to control the direction of the motor 1.

This pin along with the INPUT3 pin is used to control the direction of the motor 1.

This pin is used to enable the driver of the motor 2. This pin is made HIGH by default in module with the help of the jumper.

This pin is used to enable the driver of the motor 1. This pin is made HIGH by default in module with the help of the jumper.

in this project i will tell you how to make Line Following Robot Using Arduino which is used arduino uno smd board.this project we used parts as follow 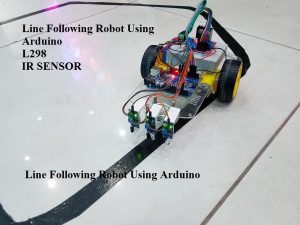 Here is the  circuit diagram of  Line Following Robot 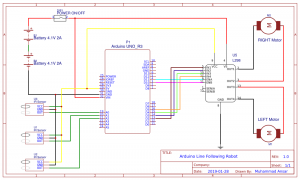 Here is the  code of  Line Following Robot

Two power supplies with common ground is used to power up the module. One of the powers is logic supply and should be 5V and the other could be 12 volt ir according to requirement. See datasheet for detail.

Place all the components in the workspace of the Proteus as shown in the following figure:

Now connect the Arduino and l298  circuit as shown in the following figure:

As can be seen in the figure that the all the control pins are connected to the digital input / output pins of the Arduino microcontroller board.
Step3:
Attach the HEX file of the code of the Arduino in Proteus as shown in the following figure:

Step4:
Hit the simulation button to initiate the animation:

in this project we are control 2 dc motors using l298 h bridge  with arduino code. You can compile and download in Arduino

we use these components

That is all for now (L298 Motor Driver Simulation in Proteus) I hope this post would be helpful for you. In the next post I will come up with more interesting applications and simulations of the Proteus. Till then stay connected, keep reading and enjoy learning.