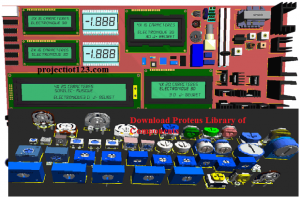 Let us now summarize all the custom made simulation models required for simulating the embedded system designed based on the Arduino microcontroller development board.

Ultrasonic sensor works on the principle of the echo affect, it has ultrasonic wave transmitter and receiver mounted side by side on the module. It is generally employed in order to detect the presence of any obstacle in its vicinity, the distance between the sensor and the obstacle is determined by calculating the time it takes by the ultrasonic waves to strike the obstacle and measured by the receiver. The ultrasonic sensor in the Proteus looks like the following:

You can download the Ultrasonic simulation model for the Proteus from the following link:

You can download the simulation model of the Flex sensor from the following link.

The flame sensor also known as the flame detector is a type of sensor that senses the presence of the fire in its vicinity. The fire sensor detects the presence of the fire by detecting the IR (Infrared Radiation) waves present in the fire. The fire sensor also consists of the operational amplifier which conditions the measured signal so that microcontroller can easily read the signals and successfully process the signals. The flame sensor in Proteus looks like in the following image.

You can download the simulation model of the flame sensor from the following link.

You can download the simulation model of the PIR sensor from the following link.

The simulation model of the LDR is installed in the Proteus by default you do not need to download any other file in order to use this sensor.

You can download the simulation model of the Gas sensor from the link in the following.

GSM (Global System for Mobile Communication) is the protocol that defines the way of sending and receiving messages wirelessly so there should be some hardware that supports this type of communication. The device that is based on GSM is called the GSM model or GSM module. The GSM modem come integrated on mobile phones that enable the phones to communicate wirelessly under this GSM network. In the similar way the GSM modems comes also with USB interface to let them connected to the computers or laptops thus enabling the GSM wireless networks on the computers or laptops. The GSM modem has the slot on which the SIM card resides. A GSM modem can supports GSM networks of multiple frequencies. Besides these GSM modems the hardware for GSM communications to be used in the embedded systems projects is also in market and is usually called GSM module. The simulation model of the GSM module in Proteus looks like in the following image: