Getting Started With Raspberry Pi

You are here:
Raspberry Pi 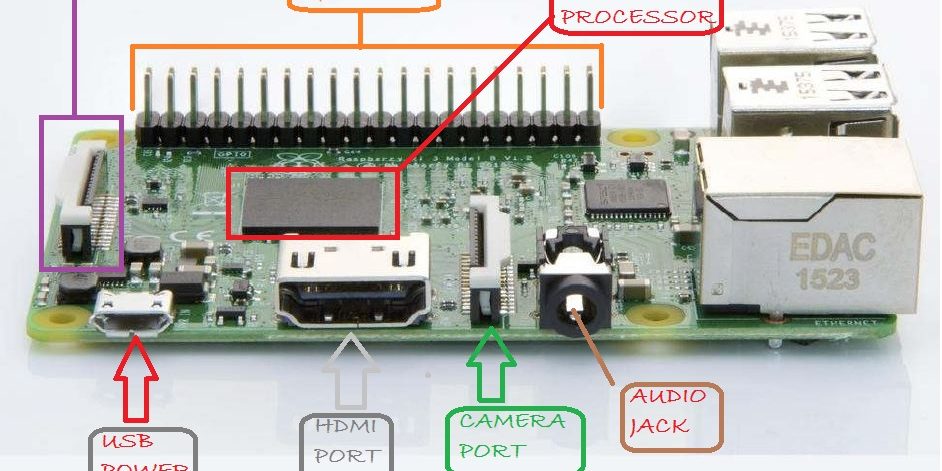 Whether you are electronics Hobbyist, Engineering enthusiast or research student you must have listen the word “Raspberry Pi”. So let’s start with the simple question

What is Raspberry pi?

A  Raspberry Pi is a micro-computer with the microprocessor, graphics chip, memory, USB Ports, HDMI output, Ethernet port, Wi-Fi and Bluetooth module all integrated on a single PCB which makes it a stand-alone device. The Raspberry pi can be connected to the input devices as keyboard, mouse and output devices as the LCD or monitor and thus can be programmed or controlled without the need of any other device. It can also be connected to the personal computer through proper networking protocols and programmed by the personal computer via dedicated softwares. The Raspberry Pi can perform many tasks that the PC does like gaming, word processing, spreadsheets and also play HD videos. To work with the Raspberry proper Operating System should be installed on it. A Raspberry Pi does not come with the already installed OS so OS needs to be installed to make Raspberry Pi useful. I will let you know how to install the OS on the Raspberry Pi in coming discussion. For now we will stick to learn the hardware of the Raspberry Pi.

Before discussing the board specifications keep in mind that there are various models of the Raspberry Pi:

Let us discuss the Raspberry Pi GPIO pins in some detail.

Raspberry Pi can be powered up either through a USB power port or 5V pins on the GPIO header of the Raspberry Pi. Pin number 2 and 4 represented in red color in the above image are the 5V pins. These two pins can either be used to power up the Raspberry Pi or can be used to power up other modules you are working with in the project for example Arduino or any sensor. By the way it is not a good approach to connect the power source to the 5V pins as these Pins do not have a regulator or a fuse so any current surge in a line can damage your Raspberry Pi. The maximum current provided by the Pins 2 and 4 depends upon the power supply of the Raspberry Pi. That is if you use a power supply of 2A on micro USB port the maximum current of 1.5A will be provided by the Pins 2 and 4.

Total 8 Ground pins are present on the Raspberry Pi board. All of them are connected internally so you can use any of them without any difference. Any sensor or actuator can be powered up via Raspberry Pi through the 5V and Ground pin. Pin number 6, 9, 14, 20, 25, 30, 34, 39 represented by black color are the Ground Pins.

Pins number 1 and 17 are the 3.3V pins. These pins are also used for powering the modules that work on 3.3 volts. These pins can provide a current of 500mA to the sensors or modules. These pins are represented by yellow color in the above image.

In short these pins are just for powering up. The actual power of Raspberry Pi lies in the standard GPIO pins discussed below.

Following is the list of some of the sensors you can connect with Raspberry Pi to perform cool feats.

List of sensors to be connected with Raspberry Pi GPIO:

The image shows the interface of simple LDR with Raspberry Pi. This is the simple example of how to use GPIO pin as input to be connected with the analog sensor i.e. Light Dependent Resistor. Similarly a lot of sensors can be connected to the Raspberry Pi. I will discuss basic projects exploiting the GPIOs in the coming articles.

Pins 3 and 5 are the I2C pins. These pins let the Raspberry Pi talk to the devices that support I2C protocol. In short these pins are used for communication purpose.

Pin number 19, 21, 23, 24, 25 are the SPI pins. Like the I2C pins these pins are also used for communication purposes. These Pins let the Raspberry Pi talk to SPI devices.

Pin number 8 and 10 are the serial pins used to communicate with other devices.

A complete tutorial of these Special Purpose GPIOs will be discussed in the coming articles. Now let’s discuss the CSI Camera Port.

Camera Port of the Raspberry Pi:

We can do a lot of Image processing and Surveillance projects using the Pi camera.

The Display port is used to connect the touch screen to the Raspberry Module. The complete tutorial will be discussed later in the next articles.

Features of the Raspberry Pi:

The full specs of the Raspberry Pi 3 are the following

I hope this article would be helpful to you. In the next article I will discuss about how to install Operating system in the Raspberry, how to interface it with the LCD and the LED blinking code. Stay connected and “Happy Learning”.